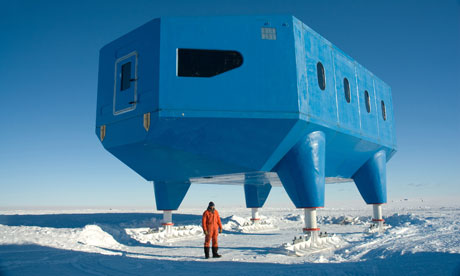 Next generation – Halley VI, Reading from the original article on Cool Antarctica. The new designs are supported by jackable legs above the snow surface. These legs are placed on skis so that the base can be moved easily. Work on Halley VI started in the Austral summer of 2007-2008 with an award winning new design.

When the base moves too close to the sea (with the drifting ice-shelf) the modules can be towed further inland by tractors. In addition the “pods” are more flexible in function and can be converted from sleeping accommodation into scientific labs as required.

The British Antarctic Survey's new base (competition mentioned last year) will be designed by Faber Maunsell and Hugh Broughton Architects. The Halley VI station will be built on a floating ice shelf in the Antarctic and will stand on skis so it can be moved.

"All the buildings are on legs, and each leg has a ski at the bottom," explained Hugh Broughton. "So, when you want to move the buildings, you lower them down on their legs and they can then be moved around by a bulldozer." This will prevent the possibility of the base drifting out into the ocean on the back of an iceberg that has "calved" off the shelf. The building will host scientists in an environement featuring temperatures ranging from -5C to -40C, 130km/h (80mph) winds and more than 50 days of near total darkness.

The design of the station is very flexible. "Global warming will presumably play a huge part; but basically the building needs to be flexible. In our design, labs can be converted to bedrooms and bedrooms to labs according to the need," added Broughton.

The Royal Institute of British Architects is staging an exhibition featuring the leading entrants in Portland Place, London.