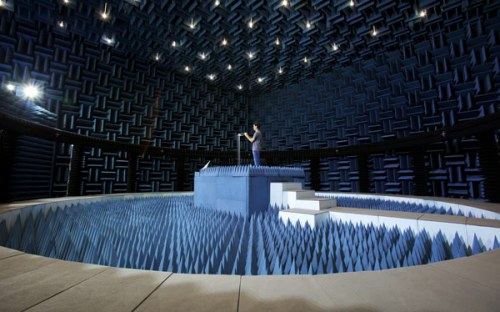 After a series of double doors and long, anonymous hallways, we entered a large, warehouse-like lab cluttered with test equipment. So our group stood in the concrete and steel room — quite sparse and utilitarian, not what you expect from Apple — surrounded by giant aluminum cubes (a few of the company’s 17 anechoic chambers used for radio testing), and a small army of Apple reps.

Ruben began by telling us that the labs used to be secret even to Apple employees — something they referred to as “black labs.”

He also informed us that there were 40 engineers working in those labs who were experts and held PhDs in physics, telemetry, and all matter of dark arts that allow the company to continually develop and test wireless technologies.

This from Engadget sums it up nicely:

And we get it — there have been people out there suggesting that Apple simply didn’t test their phone before letting it out into the market. Or that they were so bone-headed that they only tested it in those special cases made for bringing the phone to bars, so of course they didn’t see the antenna issue. But let’s be honest — this is a multi-billion dollar company that’s been making wireless devices for a long, long time. This isn’t their first phone, it’s their fourth, and though there have been reception issues with the previous models, nothing suggests that Apple isn’t doing its due diligence on these phones. The truth is, we didn’t need the tour to understand that, but it’s possible some people do.”