Incredible footage. Stealth/surprise remains one of the most valued tactics of these small special forces units. Watch how intelligence teams track the operations from high in the sky.

British Special Forces in Afghanistan. It’s a rare glimpse to watch these team warriors slug it out. The faces are blurred out to protect the identities of these covert soldiers.

Even Christ needs a repair.

Sean believes he didn’t choose to climb – climbing chose him. He considers his first expedition to Patagonia as a turning point in his life because he felt utterly connected with the forces of nature and the adventure of just being alive. Climbing teaches Sean to live life to the fullest and that he can do whatever he wants if he puts his mind to it.

Hercules on the beach

c130 Hulk of a transport plane landing at Pembrey Sands in South Wales. Chalk it up as a daring act worthy of Ian Flemming. Stationed at squadron F7 – Based at Satenas in central southern Sweden, about an hour north east of Gothenberg.

Originally wrote this back in 2009. Still a refreshing idea.

Howies are on to something with this print campaign. In a world that’s increasingly disenfranchised by the economic struggles, bitter foreign wars and a sense that big government is part of the problem, a return to simplicity is a strong message. It’s a brand that is daring, albeit with a simple bold message of peace & tranquility. 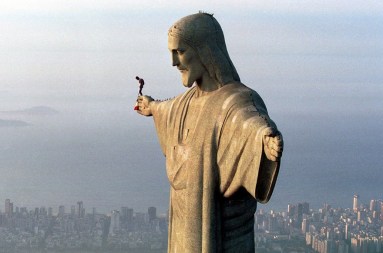 “BASE” is an acronym that stands for the four categories of objects from which one can jump: Building, Antenna, Span, and Earth.

Standing atop Brazil’s iconic Christ the Redeemer statue in January 1999, stuntman ‘Fearless Felix’ Baumgartner braced himself for what was to be the world’s lowest BASE jump at 29 metres (95 feet). 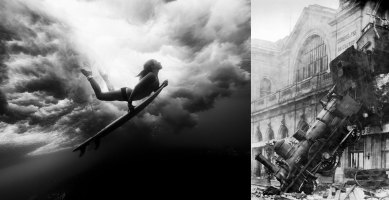 Amazing flexibility and resilience. Surfers know they’ll be spending a few minutes underwater and it’s not uncommon to be held down with big waves pounding you like a falling steam train.

The people of the Flat Earth Society believe that this place is one of the four corners of the world; the very edge of the earth. Fancy that.

Nowhere in the world looks like Newfoundland and Labrador the most easterly point of North America, perched on the edge of a continent. This chapter evokes the strange and terrible beauty of our landscape and seascape, in stark contrast to the typical images found in most glossy tourism advertising. 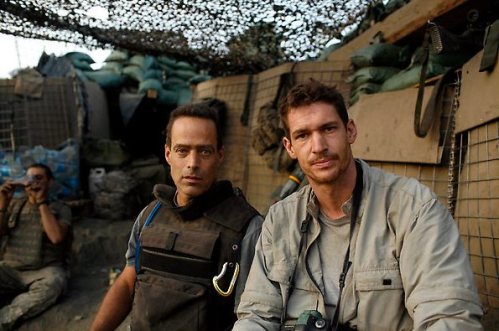 The war photographer Tim Hetherington, right, spent 14 months with a platoon of United States soldiers in the Korangal Valley of Afghanistan. He, along with Sebastian Junger, left, made a documentary about the experience called “Restrepo.”

It avoids the conventions of documentary film: there is no back story, no drive-by’s with experts for context, no underlying ideology or obvious message. The viewer is dropped into war, with a hard jolt, and resides, along with 15 soldiers from Second Platoon of Battle Company of the 173rd Airborne Brigade, in a remote and raw outpost called Restrepo, so named after one member of the platoon who is killed early in their rotation. In practical terms the soldiers of Second Platoon hump up a mountain with lots of bullets and some shovels and dig in.

I’m in complete awe of these soldiers, it’s an extraordinary achievement and it shows tremendous bravery and commitment.

It’s clear watching the film that Mr. Junger and Mr. Hetherington achieved extraordinary intimacy with their subjects over time. There are noncombat moments in the film that are very much part of the military life: the men wrestle one another and in one particularly vivid scene they crank the song “Touch Me” and gang pile on one another as the lyrics “I want to feel your body” pour out of the speakers. It’s less homoerotic than a clear antidote to the physical isolation of their posting, according to the filmmakers. 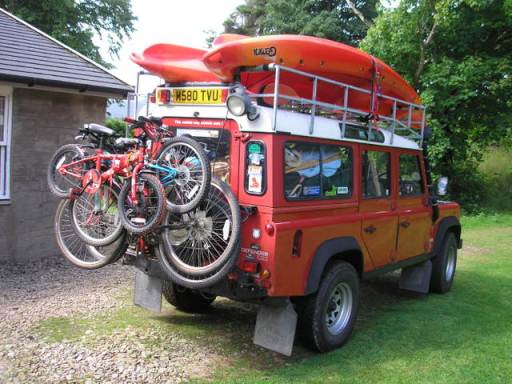 Nothing says summer time more than a #LandRover #Defender fully loaded with canoes, mountain bikes, and loaded to the gills with camping equipment!  Let the summer fun begin.

A man has posted a video of himself climbing a 577ft Kotelnicheskaya building in Moscow, Russia.

Completed in 1952, the Kotelnicheskaya Embankment Building has 32 floors and is one of the seven Stalinist skyscrapers in the city, known as the Seven Sisters. 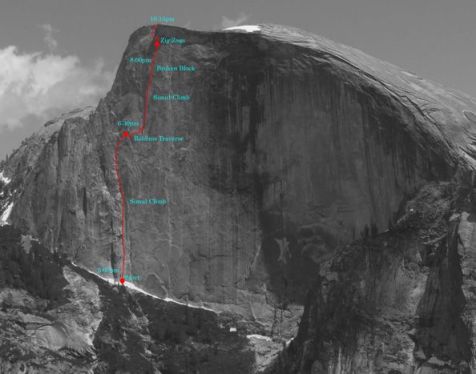 Black Diamond’s grassroots athlete Jesse Huey partnered with Shane Chelone for one of Yosemite’s most coveted big-wall advenutures: Half Dome and El Cap in a day. Chelone provided a trip report and photos that details the duo’s race against the clock. 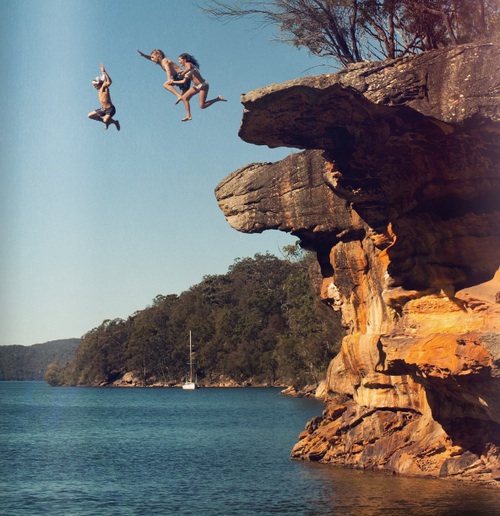 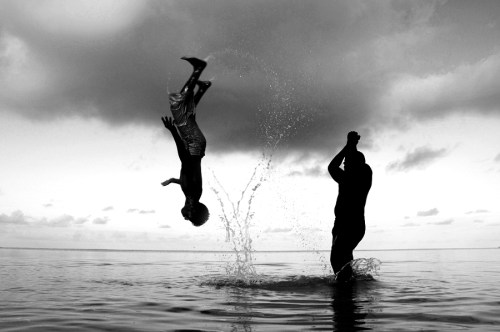 A common theme for this site, “freestyling dives” HT via aussiefool

“There’s a lot of distraction for people, so you might not never find the real you. A lot of people don’t.” -Bob Dylan

EdgeWalk at the CN Tower, Toronto

Breathtaking preview of Toronto’s CN Tower, the newest attraction, EdgeWalk opened to the public in August 2011.

“David, would you mind doing a commercial for BBC?”
“Non, il n’est pas possible”
“Would you please reconsider? After﻿ all, we will have a topless pianoplayer”
“Je suppose que nous pouvons faire une exception”

Love Me Tender, Or Else 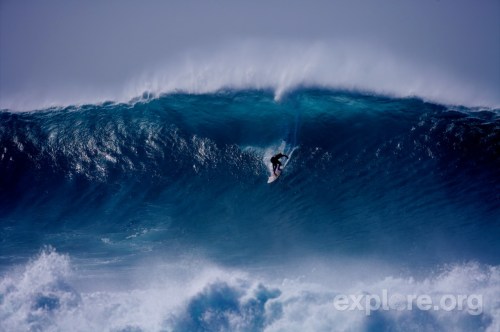 Hawaii’s surfing community and board fans around the world were shocked to hear of the passing of three-time World Champion, Andy Irons, who died in a hotel room in Dallas, Texas while returning home to Hawaii after a surf contest in Puerto Rico, where he was reportedly too sick to complete competing.

Jodi Wilmott of Ocean Promotion said in a statement, “Irons, 32, withdrew from a professional surfing event in Puerto Rico last weekend due to illness and passed away during a layover en-route to his home in Kauai, Hawaii, were he checked into a hotel in Dallas, Texas. He had reportedly been battling with dengue fever, a viral disease.” Irons was on his way home from the Rip Curl Pro Search Puerto Rico, which he withdrew from due to illness, reportedly dengue fever, which he acquired in either Portugal or Puerto Rico.

Dengue (pronounced den” gee) is a disease caused by any one of four closely related viruses (DEN-1, DEN-2, DEN-3, or DEN-4). The viruses are transmitted to humans by the bite of an infected mosquito. In the Western Hemisphere, the Aedes aegypti mosquito is the most important transmitter or vector of dengue viruses, although a 2001 outbreak in Hawaii was transmitted by Aedes albopictus. It is estimated that there are over 100 million cases of dengue worldwide each year.

Irons reportedly flew to Miami where he spent two days on an IV drip but then insisted on going home to Hawaii to see his regular doctor, Surfing Life reports.

Irons and his younger brother Bruce are from Hanalei, Kauai’s north shore. Both the Irons’ Brothers skyrocketed to fame at early ages, showing great talent and promise in the water. They have hosted the Irons Pine Tree Classic Surf contest for the past few years, and have been seen as mentors for the grom surf community of Kauai.