A Vatican for film-makers 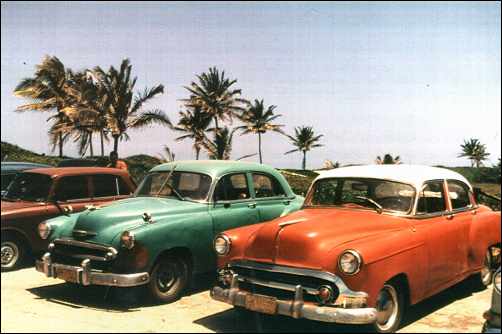 How does a Havana film school attract lavish funding and the likes of Soderbergh and Spielberg? With a nod and a wink from Fidel Castro. Chris Payne reports on a little corner of Cuba that is forever Hollywood .

“If you’re unfamiliar with Cuba’s cinematic heritage, you might assume that a film school run with Fidel Castro’s help would be coaching its students in flag-waving reconstructions of the Bay of Pigs or promo reels exhorting the nation’s nickel workers to greater heights of production. Hardly any films produced on the island since the 1960s have achieved distribution in the UK. The Buena Vista Social Club, the internationally successful documentary about a group of old-time Havana musicians, which became the soundtrack of every middle-class dinner party, was made by the German director Wim Wenders.”

Guardian article reporting on this amazing discovery in Cuba.

When I first stumbled across this story I imagined this tiny exiled island, cut off from most of the world’s consumerist behavior, only to find a thriving film making community. Immediately I wondered what stories excite them, how do they perceive the west, are they using antiquated but traditional film equipment or do digital tools play an important role for them too? This story has us thinking about presenting some photojournalism ideas to them. We’d like to follow our nose and go see visit them.

When I was at film school in Rome in the 1950s, Alessandro Bonavetti, a famous Italian director of the time, asked us students what the most important thing was for film-makers to possess:

We of course answered ‘passion’, ‘talent’, ‘vision’, but he just shook his head. ‘Health,’ was his reply. It was true. We were so poor. We wrote on waste paper collected from the streets.

That’s an outstanding insight. He was right to be concerned for your longevity and wellness.