Electric radiance of Los Angeles at night. Still incredible after I originally posted this back in 2011

Colin Rich’s interpretation of the city captures the downtown district including a memorable reverse view of the Hollywood sign. Colin’s “LA Light” journey serves as a homage to the best of LA’s landmarks at night.

The most notable benchmark for cinematic brilliance of LA’s nighttime hues and tones could be Michael Mann’s 1995 feature film, ‘Heat‘.

This movie captured a quiet ambience, albeit with some lesser known architecture.

The dramatic visual of elevated interfaces designed to convince you that the sequence is indeed sci-fi.

Failure: The Secret of Success

It’s often said, “Always dare to fail. Always take chances, and never give yourself the comfort of not trying”. In honor of Edison who’s rare successes beat the 10,000 failures.

Honda the Power of Dreams Failure: The Secret to Success

Failure. The mere thought can paralyze even the most heroic thinkers and keep great ideas off the drawing board. But is failing really that bad? We get an inside look at the mishaps of Honda racers, designers and engineers to learn how they draw upon failure to motivate them to succeed. From poor color choices to blown race engines, these risk-taking individuals provide an honest look at what most people fear most. Watch the film and discover the upside of failure.

A welcomed addition to our cinema listing featuring luscious cinematography with a deep stirring soundtrack. Bit of a familiar and trying storyline but it’s worth sticking with it for such lovely art direction

STASIS from Christian Swegal on Vimeo.

In the future, an Ex-Soldier is placed in virtual exercises to cure his Post Traumatic Stress Disorder. In the simulations, he sees glimpses of a mysterious girl, presumably someone from his past. When a Stranger appears in his facility offering answers, the Soldier finds himself once again asked to kill, this time for her…

Exquisite work. The film, the story, the subject, the bikes – beautiful.

The deepest blue hole in the world filmed entirely on breath hold by the french champion Julie Gautier.

“Guillaume Nery and myself decided to use our time during a freediving competition at Dean’s Blue Hole (deepest blue hole in the world) to make a short movie. Since a long time Guillaume wanted to make the link beween freeding and base jumping. Our goal was to emphasise on esthetic images and innovative camera moves.” Julie Gautier

It asks you to submit yourself to the peacefulness of the sport and be in sync with nature.

In 2002, the Smithsonian Institute’s National Air and Space Museum produced an IMAX film called “Straight Up: Helicopters in Action.” A brief clip from that film shows in extreme close-up how a high voltage cable inspection is performed by a lineman on a helicopter.

The unnamed lineman narrates his job description against the incredible aerial backdrop. No harm in touching 4.16 kV high voltage power lines once the helicopter has equalized with the power line.

Hoovering high in the sky closing in on segments of line needing service observation. “Courage is not about not being scared. It’s about being scared and doing it anyway”.

There’s only 3 things I have ever been afraid of: Electricity, Heights and Women and I’m married too.

This is a beautifully shot PSA filled with some wonderful documentary moments of people, children and the dramatic landscape of Delhi. One person’s view of living with global warming. Color correcting the footage helped give it a nice, rich and balanced look to this spot. Philip Bloom on a Canon 5D II.

The people of the Flat Earth Society believe that this place is one of the four corners of the world; the very edge of the earth. Fancy that.

Nowhere in the world looks like Newfoundland and Labrador the most easterly point of North America, perched on the edge of a continent. This chapter evokes the strange and terrible beauty of our landscape and seascape, in stark contrast to the typical images found in most glossy tourism advertising.

In 1997, four years after photographer, Tony Notarberardino moved into the hotel. It is a ferocious study of a tough piece of humanity to which.

Remake of the classic The Graduate from Tony Notarberardino. Beautiful stark cinematography. Iconic.

2001 proved Zubrick’s viability of film as ‘a non-verbal experience—the truth is in the feel of it, not the think of it. 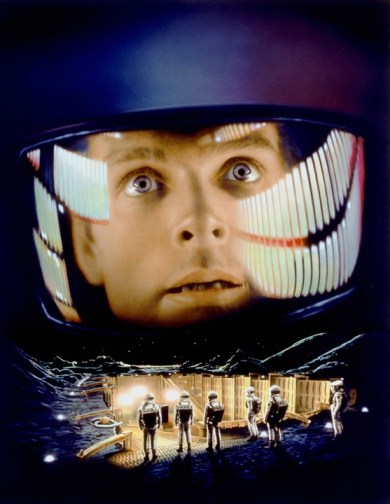 2001: A Space Odyssey is a 1968 British-American science fiction film produced and directed by Stanley Kubrick. The screenplay was co-written by Kubrick and Arthur C. Clarke, and was partially inspired by Clarke’s short story “The Sentinel“. Clarke concurrently wrote the novel 2001: A Space Odyssey which was published soon after the film was released. The story deals with a series of encounters between humans and mysterious black monoliths that are apparently affecting human evolution, and a space voyage to Jupiter tracing a signal emitted by one such monolith found on the moon. Keir Dullea and Gary Lockwood star as the two astronauts on this voyage, with Douglas Rain as the voice of the sentient computer HAL 9000 who has full control over their spaceship. The film is frequently described as an “epic film“, both for its length and scope, and for its affinity with classical epics.

The early days of Woody & Meryl. She’s so beautiful. 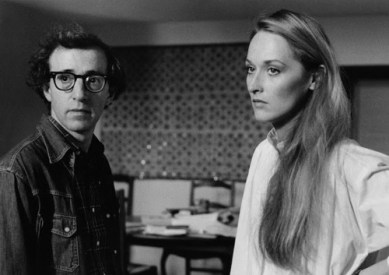 Woody Allen and Meryl Streep in a scene from “Manhattan” (1979).

Initially our creative team was inspired by Apple’s Research Lab

Love Me Tender, Or Else

The film documents Herzog fulfilling a bet he made with Errol Morris.

Roger Ebert has said, “After twenty years of reviewing films, I haven’t found another filmmaker who intrigues me more. Errol Morris is like a magician, and as great a filmmaker as Hitchcock or Fellini.”

If Morris would finish his brilliant first feature “Gates of Heaven,” Herzog said he would eat his shoe. He uses this public stunt to say some very serious things about American pop culture, filmmakers becoming ‘clowns’ to promote their work, and the culture of images (or lack thereof).

The Offical Card of Perfection

Likley to be one of the best AmEx commercial ever made.

I can only imagine what Stanley Kubrick﻿ would say looking through his nephew’s birthday photos. Beautiful crafted spot. Marty deserves top marks.

I defy anyone not to find this remarkable soundscape anything short of stunning.

Don’t be put off by occational sorrow this soundtrack has many wonderful inspiring passages.

Gustavo Santaolalla’s stunning mix that moves between bombo drums and the charango vs. the strings, as if they were the﻿ characters and the orchestra the landscape. Then we hear the electric guitar chord, like the time passing, giving a time context, actuality and rebel. It is appropriate for telling the story of such a controversial personality, traveling around a landscape without words to describe: South America. A great reminder to check out these Cuban filmmakers too.

Hans Zimmer’s career as an Academy Award-winning film composer had a bit of an unusual start: He has the distinction of being in the first music video ever broadcast on MTV.

Having orbited around a New Wave band called the Buggles in the late ’70s, Zimmer — a keyboard wizard who grew up in Germany before moving to London as a teenager, soon indulging his love of pop music at any chance he could get — managed to get a small spot on the video for the song “Video Killed the Radio Star,” which not only became a huge hit for the band, but also has the distinction of being the first video ever aired on the then-fledging Music Television Network. Following that, he bounced around various projects before partnering up with noted film composer Stanley Meyers in the early ’80s to do movie work. From that point onward, Zimmer’s pioneering use of electronic instruments in film scores helped usher in a new generation of young composers, soon securing his place in cinema history with his work on films such as “Rain Man,” “The Lion King” and “Gladiator.”

Known for his willingness to collaborate with others, Zimmer found a kindred spirit with noted director

Christopher Nolan, who brought on both Zimmer and James Newton Howard to work on his Batman films. The resulting scores for both “Batman Begins” and “The Dark Knight” were powerful and dynamic, but very atypical of what a score for a superhero movie should be: There was no endlessly-repeated theme, no collaborations with pop stars. Zimmer and Howard wrote for the needs of the film, drawing viewers in to a dark, sometimes terrifying world without the usual Hollywood score tropes dogging them the whole time. Mixing electronic elements with ambient violins and thundering percussion, Zimmer has proven that at 52 years old, he is showing no signs of slowing down.

The much-hyped sci-fi action film “Inception” marks the first time since his 1998 debut “Following” that Nolan has written an original screen story entirely for himself. Despite its A-list cast and daring action sequences, the film has its roots in distant memories and painful regrets, mixing a high-end concept with real human emotion (Nolan’s forte). Speaking about his work on the score, the warm and funny Zimmer reveals why he brought along Smiths guitarist Johnny Marr to provide contributions, how his relationship with Nolan works, and why the “Inception” music was inspired by both David Bowie and mathematician Roger Penrose.

It is best known to the wider public for his view that there is an essentially non-algorithmic element to human thought and human consciousness. Example: It has been known for about forty years that there is no algorithmic way of deciding whether a given collection of polygonal shapes will tile the plane, that is, the tiling problem is non-recursive.

Q: Having finally seen the final cut of “Inception,” what are your thoughts on it?

A: It was a very different process. You know, usually, films are being made in bits and pieces and there’s a structure of how you work it: the composer sees the movie and discusses the themes with the director and he goes off and he writes the theme — we didn’t do any of that on this one.